The VIII Moscow International Financial and Economic Forum was held on November 18, 2021 in Moscow at the Golden Ring Hotel. In accordance with the existing trends, it was held in a mixed mode – offline /online.
More than one and a half thousand people from 27 countries of the world took part in the Forum. Representatives of the business community of France, Italy, Kazakhstan, Ukraine, India, Russia, Finland, Germany, Japan, Sweden, and the United Kingdom participated in the Forum in person.
A plenary session and three parallel industry panels presented the format of the Forum. Remote Forum participants were given the technical opportunity to freely switch from one panel session to another during the broadcast.

Alexander Murychev, Chairman of the Board of the FBA EAC, opened the Forum. On behalf of the organizers of the Forum, he welcomed the participants. A. Murychev noticed that over the past years the Forum had managed to acquire its own individual recognizable face and to establish an effective business platform, which over the past seven years had allowed gathering over four thousand representatives of business communities from 38 countries of Europe, Asia and Africa and discussing the most pressing issues of Eurasian integration.
Speaking about the peculiarities of the Moscow Forum, A. Murychev noted the predominant focus on business associations of Greater Eurasia. The Forum's panel sessions have long been productive platforms for exchanging opinions in professional communities, as well as for finding business partners, since their work has always been based on the industry principle.
A. Murychev thanked the official sponsors of the Forum – the PROMTEX Company and the World Gold Council for their assistance in organizing the Forum, which was expressed not only in its financial support, but also in the intellectual content of the Forum program. 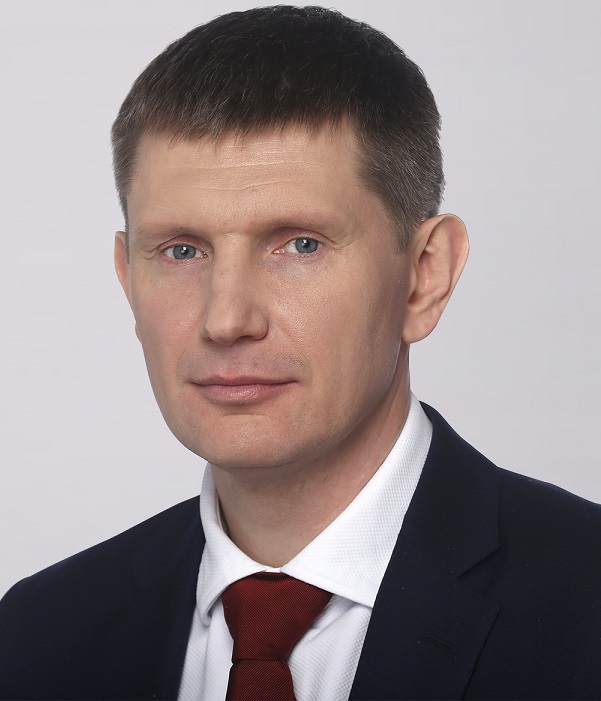 Then Mr. Murychev read out a greeting to the Forum participants from the Minister of Economic Development of the Russian Federation Maxim Reshetnikov. The Minister noted that Russia is interested in business associations that contribute to the development of the economy gaining weight and becoming reliable partners of the state.


This time the plenary session of the Forum was called "Building bridges, not barriers. Business Eurasia in a new reality". The

Forum Moderator Alexey Gromyko, Director of the Institute of Europe of the Russian Academy of Sciences, corresponding Member of the Russian Academy of Sciences, noted the extreme relevance of the name of the Forum and expressed regret that "the question of how to make people, countries, and businesses connected more than they are now separated, still remains topical."
During the plenary session, the participants discussed a wide range of issues related to the effectiveness of the Eurasian economic unions in ensuring the free movement of capital, goods and labor. The discussion also highlighted changing the role of international development institutions, issues of national priorities and regional cooperation, the role of digital transformation in the development of production and services, the place and role of China and India in ensuring the economic recovery of Eurasia. The participants could not ignore the topic of the new global climate agenda.

The first speaker at the plenary session was Dmitry Pankin, President, and Chairman of the Board of Directors of the Black Sea Trade and Development Bank, who focused on the transformation of the role of international development institutions in modern conditions. According to the expert, they are being pushed to a forced transformation by a new normality, when all international financial markets are flooded with money, credit rates are zero or negative, but when financing international infrastructure projects, not only economic, but, above all, political risks have to be taken into account. The introduction of new climate taxes in 2025 will also complicate this situation, which will certainly complicate the work of export-oriented companies. In this regard, an expert in turning banks into so-called knowledge centers sees the role of international development institutions in the conditions of a new normality, when the bank becomes an expert in all issues arising from the moment of the origin of the idea of creating and implementing an intercountry project.

Manish Kumar, President of the Soltex Group Corporation, described the issues of India's economic cooperation with the countries of Greater Eurasia during his speech. As for the prospects of the development of India's relations with the EAEU, the speaker recalled that a trade agreement was recently signed. It will help to increase the growth of mutual trade, noting that today's figure of $ 15 billion compared to $ 80 billion of trade deals with the EU is too small for such long-standing and strong historical ties of India with the EAEU countries. Then M. Kumar assessed the economic potential of India, its new legislative initiatives in the field of investment activity, estimating the purchasing power potential of the population at 450 million people. Another important aspect in the development of trade in Eurasia, Mr. Kumar called the need to make settlements between countries in national currencies in order to minimize the risks of blocking banking transactions.

Artem Chaika, President of the International Congress of Industrialists and Entrepreneurs, shared the practical aspects of their activities and gave a number of examples of major initiative projects of the Congress. In particular, the speaker told about the construction of an International Business Center for Economic Cooperation on the territory of Moscow, based on which international trade, exhibition activities would be organized, and Moscow representative offices of foreign ICIE members would be opened. He also shared the initiative being worked out today for the implementation of an infrastructure project – the Eurasia Sea Canal, which should link the Caspian Sea with the Azov-Black Sea basin. Besides Russia, Kazakhstan, Azerbaijan and Ukraine are interested in the implementation of this project.

The report of Aidar Kazybayev, head of the Office for Interaction of the Astana International Financial Center and the Eurasian Economic Commission, which followed this speech, was devoted to the formation of the business environment in the context of the new climate agenda. The expert recalled the recent climate summit held in Glasgow, which spoke of the need for all countries of the world to make joint efforts to ensure low-carbon development of the economy, its decarbonization. Within the framework of environmental partnership and integration, according to the expert, it is necessary to ensure the availability of green technologies and green finance to developing markets, increase the role of international development banks in the transition to a green economy, ensure the production of components for renewable energy facilities, establish low-carbon industrial cooperation in the EAEU, develop and implement greenhouse gas capture and storage technologies and forest-climate projects, create a Eurasian hydrogen Consortium within the EAEU in order to combine scientific and industrial potential, the development of innovative technologies, and the ESG club on the territory of the Astana International Financial Center, which already unites 1100 participants from 60 countries of the world. The expert also expressed satisfaction with the fact that the participants of the climate summit failed to make a decision to abandon the use of coal in the near future, especially since modern effective technologies for capturing and burning greenhouse gases already exist. In addition, not all renewable energy sources are safe today.

Federico Foders, President of the International Economic Senate of Berlin, noted in his speech that world trade has not yet recovered from the severe impact of the pandemic and no one can unequivocally predict how it will develop in the coming year. According to the expert, the biggest growth potential now exists only in the service sector. The expert believes that the main European trends today are import substitution, localization of production, de-offshorization, that is, de-globalization, which can occur through regionalization. In addition, Mr. Foders focused on the problems and challenges of the new industrial revolution, in which new technologies will inevitably displace a large number of vacancies in the world labor markets, which will inevitably lead to social tension in countries and in the world as a whole. At the same time, according to the expert, it is possible to answer today's challenges only by developing digital technologies.

Dmitry Cheltsov, Deputy General Director and GR Director of the Association of European Businesses discussed the challenges and opportunities facing European companies in the context of Eurasian integration in his speech. Speaking about the Association, he outlined the goals set by its leadership, namely: promoting the formation of a rational regulatory environment, strengthening the foundation of international cooperation, as well as helping to increase the investment attractiveness of Russia and the EAEU countries. Further, the expert focused on the issues of ensuring sustainable development. In his opinion, the figure of exports from the EAEU countries for the first 8 months of this year amounted to $ 133.6 billion, almost the same as for the whole of 2020, which cannot please. The countries of the Eurasian Union with 182 million consumers are an attractive market for European business. At the same time, crude oil suppliers from the EAEU countries occupy a dominant position in the EU markets. Many European companies in recent years have localized their production in the territory of the EAEU countries and provided their products to the near and far abroad. Modern high-tech production facilities created by European businesses in the EEC countries automatically integrate them into the global supply chain. Separately, the speaker focused on the transport potential of the Eurasian states, noting that it is difficult to overestimate it, especially in connection with the recent accident on the Suez Canal. The expert also stressed that land transportation is increasingly competing with sea transportation and gave an example of a road route from Norway to China, which takes about 15 days, which is three times less than traveling by sea. The expert has not bypassed the modern environmental agenda. According to the expert, the EU's plans to implement a mechanism for cross-border carbon regulation deserve special attention. According to the Russian Ministry of Finance, the likely share of exports to the EU of goods falling under the regulation may amount to 20%. At the same time, if regulation is tightened in the longer term, up to 80% of exports from the EAEU countries to the EU may fall under the cross-border carbon tax. In conclusion, Mr. Cheltsov said: "In the conditions, when political contacts are difficult, business contacts can become a bridge for expanding cooperation and discussing issues that are of mutual interest to the countries."

Summing up the discussion, Alexey Gromyko noted that the main thesis "globalization through regional integration" is the backbone today, according to leading experts, and cooperation between the EU and the EAEU in the coming years should become a priority for them. In conclusion, A. Gromyko thanked the speakers and participants of the plenary panel of the forum and wished everyone constructive dialogues, interesting discussions and success in the further work of the panel sessions.


Within the framework of the forum, the International Public Award "Business Elite of Eurasia", established in 2016 by the FBA EAC and the International Banking Council, awarded the Russian Union of Industrialists and Entrepreneurs in the "Stability Standard" nomination. The Organizing Committee of the award noted Kaspersky Lab as the "Technological Breakthrough" of the year. Finnish company Metso-Outotec received the award in the "Social Responsibility" nomination.

Diplomas awarded the sponsors of the forum PROMTEX Company and the World Gold Council.

The forum continued with three parallel panel sessions dedicated to discussing the most pressing issues of the Eurasian partnership.