On November 30, the Fifth Moscow International Financial and Economic Forum “The Eurasian Economic Union and the EU: search for new formats of cooperation” was held in Lotte Hotel Moscow.
The participants of the Forum traditionally discussed current economic aspects of the Eurasian integration; considered the opportunities of European suppliers and manufactories to enter the EAEU market; learned about typical challenges and features of doing business in Russia and the EAEU for European companies; talked about the legal conditions and legal protection of business entrepreneurship in Russia, taking into account the influence of the EAEU.
The Forum was attended by representatives of international development institutes, financial associations and organizations, businessmen, expert in the field of finance, economic, customs, logistics and insurance markets that are members of the associations of the Eurasian Economic Union (EAEU) and the European Union. The Forum program began with a plenary session “Eurasian Economic Space - Today and Tomorrow” where Alexander Murychev – Chairman of FBA EAC Coordinating Council, Executive Vice-President of RSPP, moderated. Addressing the participants, he noted that this Forum is an anniversary one (the annual event celebrates its fifth anniversary). “We have a small but significant date. The first four forums brought together more than 800 delegates from different countries of Europe, Asia and Africa. Over these years we discussed a wide range of practical and theoretic issues but we always focus on looking for a mutually beneficial partnership in the field of financial and banking cooperation in the interests of developing the economies and businesses of our countries”. Speaking about the Forum organizers, A.Murychev added: “Today FBA EAC is a powerful, authoritative, business platform that unites over 80 members from 20 countries of the world which allows expanding the geography of participants annually and in the multi-years partnership with the Eurasian Economic Commission and the RSPP to increase the level of intellectual and professional content of the Forum”.
In this regard, Alexander Shokhin, President of RSPP, noted that under the conditions of the international anti-Russian sanctions regime which “will only increase for a long time”, it is possible to find common ground between mutual interests of Russia and European countries at the level of cooperation and business of the EU and the EAEU. According to him, on the part of the Russian authorities, this requires the creation of the most favorable conditions for the inflow of investments, including foreign ones.
The head of RSPP recalled that the presidential “May Decrees – 2018” identified more than a dozen national projects that set priorities for the integrated development of the Russian economy. Specifically financial sector, as the head of RSPP noted, none of these national projects is dedicated to the financial sector, but each area implies its participation, creates a request for the banking system to search for effective mechanisms, to develop market technologies, to concentrate resources in key areas of development.
A. Shokhin told that the RSPP together with the Ministry of Finance of the Russian Federation developed and proposed to the Government a concept for consideration which describes incentives to attract private investments, implement the national projects and create a favorable investment environment. “In particular, we are talking about creating guarantees for investors, in accordance to which regulations and fiscal conditions for the period of the investment project, its cost recovery, will not change radically, even if the regulatory pressure on the business will be reinforced. That is, a stabilization clause will be envisaged, in international practice it is called “grandfathering clause”. If we have fixed the certain conditions in the investment contract then they will be valid, even if additional legislative decisions are taken in the country, which these conditions don’t fully meet. In particular, the case is about the adoption of a federal law on the protection and promotion of capital investments”, - said Alexander Shokhin.
He expected that the relevant set of measures will allow to increase the share of investments in fixed assets in Russia from the current 18-19% to 25%. In this case it will be possible to talk about the creation of a basis for solving every possible task in the field of developing the backbone infrastructure, the social sphere, health care, education, development of export potential, ecology and etc. 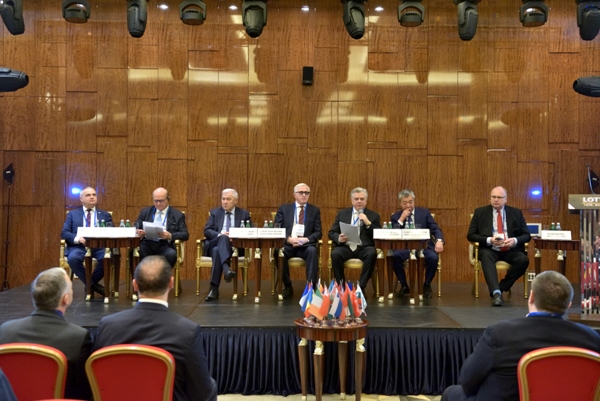 Then Alexander Murychev read out to participants the greeting speech of Tigran Sargsyan, the Chairman of the Board of the Eurasian Economic Commission, after which he gave the floor to Bakhytbek Baiseitov, President of FBA EAC, President of the Association of Banks of the Republic of Kazakhstan, Chairman of the Board of Directors of JSC Bank CenterCredit.
According to Bakhytbek Baiseitov, FBA EAC is able to consistently achieve its objectives in the interest of its members. He recalled that the idea of creating the Association initially was to integrate the interests of entire business-community (and not only financial) in the context of the “changing architecture” of the world order, searching for points of growth where it is necessary to include joint recourses, financial technologies, etc. He told about the formation of the international financial center “Astana”, as well as noted that today the economy of the Republic of Kazakhstan is focused on the global inter-state project of the new “Silk Road”.
Anatoly Aksakov, Chairman of the Committee on financial market of the State Duma of Russian Federation, Chairman of the Board of the Association “Russia”, noted the very close interaction of the ABR and FBA EAC. According to him, this cooperation at the level of non-governmental contracts under the conditions of political and economic instability acquires particular value. “In the context of today’s sanctions we have to act according to the principle - barking at a knot”, - said the deputy.
He informed about an active phase of preparation of the Project Finance Factory of VEB. “At the end of this year we will amend the law on Vnesheconombank allowing to accelerate the process”, – Anatoly Aksakov said. He also provided assessment to the prospects of the program “Digital economy”, and referring to the researches of McKinsey Institute he pointed out that the implementation of the “road map” within this project will bring additional 10 trillion Rubles to the Russian economy. “A whole range of laws is being prepared in this sphere. Our committee alone is working on three draft laws, while there are 50 of them. The whole document flow will become digital, a lot of services will become available in digital form. But all this demands conjunction in the framework of EAEU and the EU, – the head of financial committee continued. Alexander Murychev also underlined the importance of harmonization of technical specifications for the process of European and Eurasian integration. 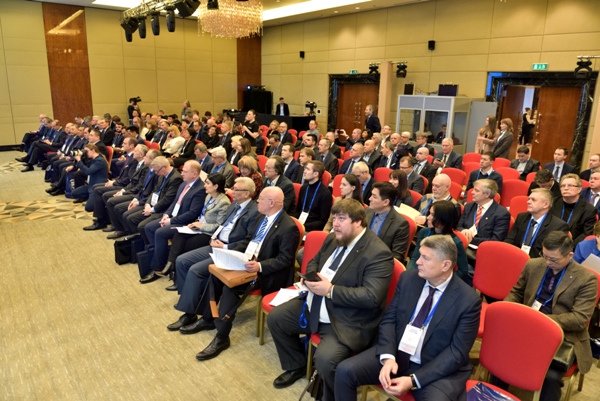 Ives Pozzo di Borgo, Former President of the Parliamentary Friendship Group with Central Asia in the Senate of France, in his speech assured the participants that European business in general doesn’t have any hostile sentiments for Russia. He said that in 2016 when he was a senator he initiated the relief of the sanctions. And this resolution was supported by 301 voices “for” and only 16 voices were “against”. However, later this document wasn’t approved by the European Council.

Frank Schauff, CEO of the Association of European Businesses stressed that economic integration is advantageous for all parties, both for Europe and Asia. He said that business in Europe is likely to focus on the models of integration and better relations with Russia. He also agreed that now there are additional opportunities for interaction with Russia within the EAEU. At the same time Frank Schauff underlined the importance of such step as a new Customs Code in Eurasian area with single tariffs for all countries, harmonized customs procedures and new technologies in the sphere.

Waldemar Herdt, Bundestag Deputy, party Alternative for Germany was quite positive about the future of economic integration with Russia. He quoted a German proverb saying that “A pessimist in the only black earth where nothing grows”. “A policy which hinders business is a bad policy” – he stated.

According to Waldemar Herdt, food, economic and ecologic security is a strategic issue for every state in our changing world. “We need new patterns of interstate cooperation. American influence on Europe and Asia is gradually decreasing. And a kind of vacuum appears which could be filled by European businessmen.  In fact Germany still depends on its overseas partner, and this doesn’t allow us to reach the full range of cooperation with Eastern countries. But today in our country a young movement is growing with pragmatic views, primed to Eastern cooperation. These people understand that the future of the EU depends on how we build this Eastern bridge. It’s a unique chance, and European businessmen are not going to miss it. And all this sanction hysteria has only one aim – to stave off economic European and Eastern block with its huge potential”, – said Waldemar Herdt. He also appealed to be more active in building interstate ties at the level of small and medium business. “It is always easier to screw up a big project than thousands of links between small enterprises, which make 60% of German economy”, – concluded the German deputy.

After the plenary session there was a short formal ceremony where Bakhytbek Baiseitov together with Alexander Murychev presented diplomas to FBA EAC new members – head of Mongolian Bankers Association, head of CCECRR and to the company “Antares Trading”. FBA EAC also signed the agreement on cooperation with the National Committee of the development of economic cooperation with Latin American countries (CN CEPLA). 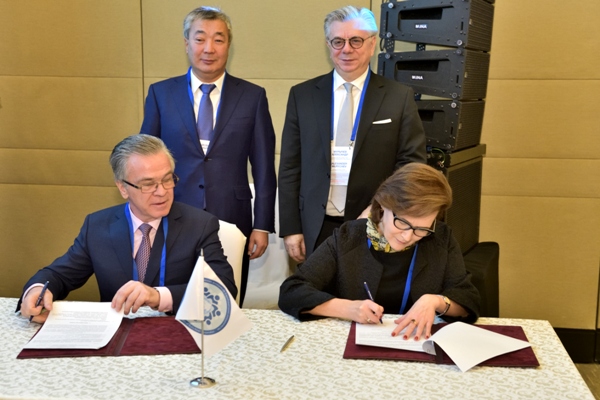 Signing the agreement on cooperation between FBA EAC and the National Committee of the development of economic cooperation with Latin American countries (CN CEPLA).

After that the participants of the Forum continued discussions in breakout sessions:

“Customs and logistics - "alpha" and "omega" of foreign trade”