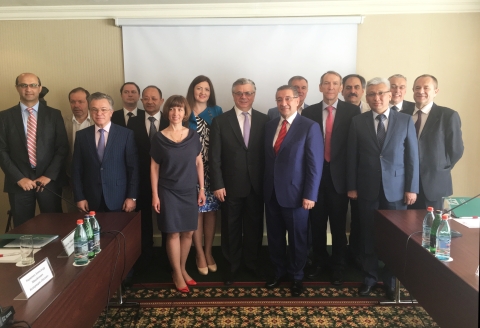 In Yerevan, at the invitation of the Union of Banks of Armenia, held a public meeting of the International Coordination of Banking Associations of the CIS Council of Central and Eastern Europe. The main question is: "The economic crisis and the national currencies of the CIS countries, Central and Eastern Europe: the volatility and interference." Financial and Banking Association of Euro-Asian Cooperation (FBA EAC) was represented by its General Director Oleg Berezovoy. The meeting was attended by the heads of banking associations and unions from Armenia, Belarus, Hungary, Kazakhstan, Kyrgyzstan, Tajikistan, Poland, Russia, Serbia, Slovenia, Moldova, Ukraine, Uzbekistan, Montenegro, the Czech Republic. The meeting was opened Murychev Alexander - Chairman of the Board of the Association of Regional Banks of Russia. The meeting analyzed the current state of economic development and banking sectors in their countries, under the conditions of a dramatically changed over the past two years, the rate of national currency, and assessed the prospects of mutual cooperation of credit institutions in terms of exchange rates volatility. On the proposal of the Independent Association of Ukrainian Banks, the next meeting of the International Banking Council scheduled to be held in autumn 2016 in Kyiv.